Vietnamese workers and families were persecuted because of “Usury”

"They suggested that we should collect debts for them if we want to live in peace. When I said the workers had quit their jobs, they accused me of having an affair and posted pictures online", K. (in Binh Duong) said.

Many workers in Binh Duong and Dong Nai provinces became victims of usury activities. Not related to the loan, but many of their relatives and colleagues are also threatened and harassed by high interest loan groups.

Sharing with Report from Tien Phong news, Mr. TVK, Head of Administration and Human Resources Department of MH company (Binh Duong) said that in the past, a few workers of the enterprise borrowed money from usury and then lost capability to pay. Workers borrow money to quit midway at the company and then cut off contact. “After attacking the borrower's relatives unsuccessfully, the lender turned to terrorize many people at the company, including me. They called and texted us asking us to ask for money instead if we wanted to be left alone. When I said the workers had quit their jobs, they accused me of having an affair with the company's accountant and then posted the picture on social networks", Mr. K. shared.

Mr. NM (engineer working at a foreign company in Thu Dau Mot city, Binh Duong) said that in 2009, he lost his identity card (ID card), then went to a new job.

“In the past few days, I have been called by an unknown number to psychological terror, they asked to pay 10 millions dong. They said I borrowed money and didn't pay. I went to work with HDSS Finance, they gave me a contract with exactly the same information as me on my lost old identity card”, Mr. M. said.

“After failing to collect my debt, they went to the company to pressure me. The human resources department called me to work and asked to solve personal problems by myself so as not to affect the company. I explained, but the company said, if the lender continues to put pressure on them, I will be fired. I also don't know why they know my phone number and place of work", Mr. M. wondered.

Mr. TVH, a usury borrower in Binh Duong, said the loan procedure is easy, just show your ID card and declare some information, relatives or friends will get a loan.

“I have a loan of 10 million VND, I have to pay 500,000 VND every day, and pay continuously for 40 days. During the past few days, due to not being able to pay, I was threatened and pressured by the staff of the financial company, forcing me to give up my possessions and run for people, "said TVH.

Not only threatening, the loan shark also came to the worker's house to scare and spray paint after many unsuccessful phone calls. Ms. TN's family (living in Trang Bom district, Dong Nai province) was constantly thrown stones by some strangers, throwing dirt into the house, causing property damage. 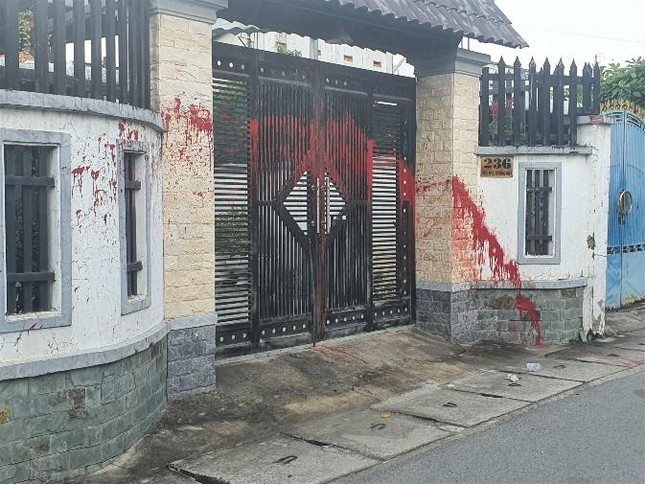 According to Ms. N., her husband had previously introduced a friend to borrow 30 million VND from a lender. After that, the friend borrowed up to VND 200 million and then lost the ability to pay interest. The lender immediately turned to ask Mrs. N. and her husband to pay the debt for up to 300 million VND.

“Recently, I suddenly received a call from a stranger asking me and the teachers at the school to collect debt from a parent whose child attends the school. When I asked, I learned that a student's parent had borrowed money from a credit institution. Being rejected, they cursed and threatened to confuse me and the teachers at the school," said teacher Nguyen Hong Son, principal of Chu Van An High School in Bien Hoa city, Dong Nai province.

Senior Colonel Huynh Yen Nam, Chief of Police of Bien Hoa city (Dong Nai), said that over the past time, the unit has detected and handled many groups of usury protection and activities. They call and put pressure to collect loans from employees who are hot and unable to pay their debts. According to Colonel Nam, the unit is continuing to fight and prevent black credit activities in the area.

Meanwhile, Colonel Tran Van Chinh, Deputy Director of Binh Duong Provincial Police, said that in order to effectively prevent and fight usury crimes, the police are coordinating with agencies and mass organizations to increase Strengthen propaganda with the motto of going every alley, knocking door to door so that people understand the methods and tricks of the crime, especially the crime of high interest loans, to know how to prevent it.